Stove-top Popcorn with Nutritional Yeast | Make your own stove popped popcorn with these simple instructions - no special equipment - just a pot with a lid, a bit of coconut oil and some popcorn kernels.

This popcorn is perfect for vegans if you leave out the butter and top it with just the coconut oil (which is really delicious) - because the other ingredients are just the coconut oil you cook it in, nutritional yeast (that magical little ingredient that adds kind of a cheesy taste for people who don't each cheese) and then salt and pepper. Perfect.

How to Make Stove Top Popcorn With Nutritional Yeast

If you haven’t made stove top popcorn before, watch your heat. I never put mine above medium.

Use a large sturdy pot with a thick bottom on it. Add a tablespoon of coconut oil and three kernels of corn. Add the lid (I like my glass one so I can see what’s going on.) Heat at about medium or so until the three kernels pop, and then quickly add the rest of the kernels and add the lid back on. Shake the pot quite often.

Cook until there’s a few seconds between each pop, then remove the pot from the heat.

Melt the butter and coconut oil together. (Sub in more coconut oil for the butter for a vegan version) Now, drizzle a bit of the mixture on the popcorn, sprinkle with salt and pepper and the nutritional yeast, then toss it all, or use a wooden spoon the stir. Repeat until it’s done.

*Typically ¼ cup un-popped corn kernels should yield 8 cups popped corn. I find that it varies, depending on how much corn actually pops.  I also usually pop one cup of kernels at a time for movie nights for the whole family.
Keyword popcorn
Have you tried a recipe? Tag @pipercooksblog or tag #pipercooksblog!
Spicy Sriracha Popcorn
Make your next movie night or game day fantastic with this easy, spicy snack.
Get The Recipe 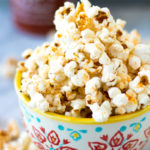 I want to help you put healthy, delicious homemade food on your table. That includes the cheesy, sweet, and carby because life is all about moderation, right? I think food made with fresh ingredients is the best - and it's not hard once you know how to make it, so grab your apron and let's cook together. If I can learn to cook, you can too!

All photography and recipes on this site are Copyright © 2021 Jacqueline Piper © PiperCooks except where stated and may not be used without permission.