Mexican Chopped Salad – Inspired by the flavors of Mexico, this salad is loaded up with corn, avocado and cilantro with a dressing made of oil, lime juice and Mexican oregano from the Yucatan Peninsula and topped with pickled red onion and crispy corn tortillas.

I had some of the most incredible food during my two weeks in Mexico at the end of last year. The most memorable dining experiences ever, including one particular dish of Chilaquiles with a mole sauce that was the best thing I have EVER eaten. Couldn't stop thinking about it and I keep trying to recreate it.

Like so many people who have just visited a new country and come home feeling blown away – by the people, sights, culture and cuisine, I can't stop myself from attempting to recreate those special dishes.

Of course I brought back what I could for ingredients, including some oregano, cinnamon, epazote, Yucatan dried peppers (not including the vanilla and molcajete that couldn't get through customs with me) and I've been experimenting with different ways to incorporate them into our daily cooking.

This salad has a couple of things that remind me of Yucatan foods. We saw some of the biggest avocados I've ever seen there. So many different uses for corn. And pickled red onions - a favorite on panuchos.

This salad is by no means authentic, but it is inspired by a few of those special ingredients we enjoyed in Mexico.

How to Make a Mexican Inspired Chopped Salad

Make the dressing at the bottom of your salad bowl first. The dressing consists of oil and lime juice and some spices. I brought back some Mexican oregano and I use that here but if you don't have it, just replace with the more typical dried oregano. Just whisk it all together.

Chop the salad greens and add them to the bowl. Add the drained canned black beans and some halved cherry tomatoes. Of course we add corn – it's used in various ways in Mexico. (I dropped most of the corn that was supposed to be in these photos, oops! Don't drop yours!)

I added avocado and cilantro, both of which we saw at every market in Merida and Valladolid, including some of the biggest avocados I've ever seen. Mix everything together.

Garnish with some fried tortilla strips and some pickled red onions, the recipe for which I'll share on Friday. 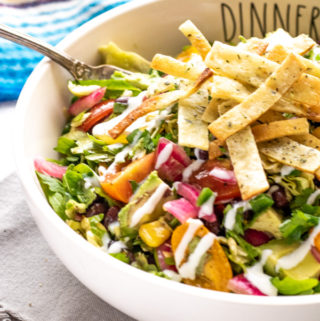 Jacqueline Piper
5 from 1 vote
Inspired by the flavors of Mexico, this salad is loaded up with corn, avocado and cilantro with a dressing made of oil, lime juice and Mexican oregano from the Yucatan Peninsula and topped with pickled red onion and crispy corn tortilllas.
Print Recipe Pin Recipe Save Recipe Recipe Saved!
Prep Time 10 mins
Total Time 10 mins
Servings 4