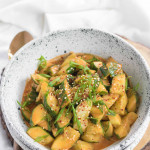 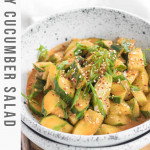 Spicy Cucumber Salad | Crunchy crisp smashed cucumbers are covered in a sweet and spicy, tangy sauce and garnished with sliced green onions and toasted sesame seeds for a delicious and refreshing side salad.

This spicy cucumber salad is a super simple side dish with only 6 ingredients plus optional garnishes and takes only about 10 minutes to make. This sweet and spicy cucumber salad is perfect on the side of anything from my Spicy Garlic Noodles recipe which also uses gochujang, to my Crispy Chicken Burgers, to my Oyster Mushroom Po'Boy Sub.

This Korean-inspired spicy cucumber salad is crunchy from the smashed cucumbers which are coated in a bold savory sauce. The sauce is creamy from a bit of mayo, sweet from the hoisin sauce, and slightly salty and spicy, with the fermented, umami notes from the gochujang paste. The resulting combination is a winner - it's spicy, crunchy and sweet, savory, tangy, and refreshing all at the same time.

Use the table of contents below to jump to any section of this blog post. You can also use the jump to recipe link above to get right to the recipe card.

Gochujang is a Korean fermented red pepper paste made with Korean chili flakes (Gochugaru), glutinous rice, soybean paste, and salt. As the paste ferments the glutinous rice lends sweetness, the chili flakes add spice, and the soybeans provide a bold umami flavor. The result is amazing.

What is Korean Cucumber Salad?

Typical cucumber salads are made with sliced cucumbers and a thin soy sauce based sauce spiced with gochugaru - Korean chili flakes.

My cucumber salad is Korean-inspired with the flavoring of gochujang - red pepper paste. Gochujang is made with gochugaru, plus glutinous rice. So if you're looking for an authentic Korean cucumber salad, this is not it - but it's still super delicious, easy to make, and uses only a handful of ingredients.

Why do you smash the cucumbers?

I smash the cucumbers for this recipe so that I can keep the cucumber chunks bigger while keeping their crunchy texture.

So by smashing thick-cut cucumber you get all the ragged little craggy edges that soak up the sauce but because they are cut thicker they stay nice and crispy and crunchy for serving.

Can I slice the cucumbers instead of slicing them?

Yes, but as I said above I cut them into thick slices and smashed them specifically to keep their crunchy texture. Thin sliced cucumbers will go soggier faster.

How to keep cucumbers crunchy for cucumber salad

To keep cucumbers from getting soggy in cucumbers salads:

Cucumbers are 96% water, so the more water you can get out of the cucumbers the crunchier they'll be if you don't serve them immediately.

If I'm serving this right away, I don't worry about any of this, I just cut, smash, sauce, garnish, and serve the cucumbers.

About the ingredients for this recipe. See the recipe card below for exact amounts.

If you want to make it ahead of time, you can follow the instructions for salting the cucumbers to remove some water. Those instructions are at the bottom of the step-by-step photos and also in the recipe card below.

2. Slice the cucumber in half lengthwise.

3. Lay your knife flat on the cucumbers and press down (carefully) to smash them.

4. You can also smack them with the back edge of your knife.

6. Mix the sauce with the cucumbers and add some sesame seeds. Stir and serve right away, garnished with more sesame seeds and some sliced green onions and gochugaru (Korean red chili flakes), optional.

I wrote this recipe to serve 2 people - that's ½ a large cucumber each. This recipe is easily doubled or tripled. Use the 2x or 3x buttons on the recipe card to easily calculate a bigger batch.

RECIPE TIP: To make this ahead of time - after step 5 move the cucumbers to a colander set over a bowl and salt the cucumbers. Let sit for 30 minutes until some of their water has drained out. Rinse off the salt and pat them dry then add the sauce to the cucumbers. Refrigerate for 1-3 hours and the cucumbers shouldn't release too much more water. Stir before serving.

✔ This recipe is vegetarian

> To make this vegan, use a vegan mayo substitute product.

> If you love cucumber salad but want to try different flavors, try my Mediterranean-inspired Chickpea, Cucumber, and Tomato salad.

No special equipment is needed for this recipe, just a knife to cut the cucumbers.

I recommend making this cucumber salad shortly before you need it, or salting the cucumbers as directed in the recipe card to make this recipe a few hours ahead of time.

Cucumbers are mostly water (96%!) so they will release the moisture into the sauce and get soggy, but salting them, rinsing and patting them dry helps them release some moisture before and retain their crispness.

How do you keep cucumber salad from getting watery?

Cucumbers are made of mostly water (96%) so to keep them crunchy you can salt them in order to release some of their moisture before making the salad. Set the sliced cucumbers in a colander over a bowl and salt them then let them sit for 30 minutes. Rinse and pat dry before using.

How long does gochujang last?

Gochujang is a fermented product and when properly stored and unopened can last a long time - up to 2 years! Once opened, gochujang should be used within a few months as long at the texture, color, consistency and smell are all normal. Follow the instructions on your package. Store unopened gochujang containers in a dark, cool and dry place like a pantry with doors. Store opened gochujang in the fridge with the lid on and the foil or plastic cover in place for optimal moisture levels.

Where do you buy gochujang?

Can you make cucumber salad ahead of time?

You can make cucumber salad a little bit ahead of time, 1-3 hours, if you salt the cucumbers and let some of their moisture release. 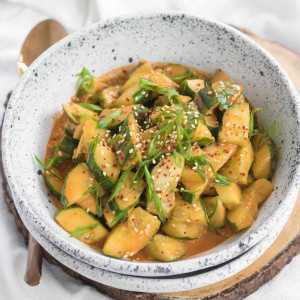 Don't have English cucumbers? Use mini cucumbers instead. To make ahead: If you're serving this right away, make it as the recipe card instructs. To make this a few hours ahead of time, you'll need to salt and drain the cucumbers to release some of their moisture so that they don't get soggy and water down the sauce. To salt the cucumbers, place the sliced cucumbers in a colander set over a bowl. Sprinkle with kosher salt and let sit for about half an hour. Rinse the cucumbers and pat dry, and then combine with the sauce. Set the dish in the fridge for up to 3 hours or so. Mix in any water that the cucumbers have released.

Read our full Nutrition Disclaimer.
Keyword 10-minute side dishes
Have you tried a recipe? Tag @pipercooksblog or tag #pipercooksblog!

Disclosure: This post may contain affiliate links, meaning I get a commission if you decide to purchase through my link, at no extra cost to you.

Rating, commenting, and sharing my recipes really helps. Thanks for taking the time! Mention @pipercooksblog on Instagram.

Save this image to your side dish or salad board on Pinterest.