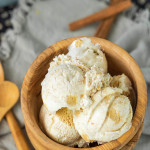 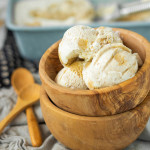 Cinnamon rolls are one of the dreamiest, coziest desserts in my opinion. I love imagining new desserts based around cinnamon rolls, like my cranberry sweet rolls that have a cranberry jelly filling instead of butter, cinnamon, and sugar.

One of the most popular recipes on my blog is my Cinnamon Roll Overnight Oats - they are amazing and so easy to make and full of cozy cinnamon flavor.

The base of no-churn ice cream is a can of sweetened condensed milk and a pint of whipping cream that is whipped to stiff peaks. Once you combine the two you'll have a base that you can flavor any way your heart desires. I've done peanut butter and double dark chocolate.

I've done the classic Mint Chocolate Chip ice cream, and recently I made a Pumpkin Pie ice cream. Both are fantastic.

The ice cream base is cinnamon flavored BUT there's also dough chunks in it! I'll show you how to make the no-bake dough chunks (think cookie dough) and right before you freeze everything, you'll dot the dough chunks throughout your ice cream. This makes the finished ice cream taste seriously like cinnamon buns!

Use the table of contents below to jump to any section of this blog post, including information about the ingredients, substitutions you can make, how to store this recipe, step-by-step photos, and a printable recipe card. You can also use the jump to recipe link above to get right to the card.

About the ingredients for this recipe.

See the recipe card below for exact amounts.

Note: Watch the video tutorial above to see exactly how to make this recipe.

To make the cookie dough, you need to first heat treat the flour. You do this because raw flour has a high probability of containing contaminants like Salmonella and E. coli. Heat treating can make it safe to eat. Ben & Jerry's recommends heating your flour to 165°F (74°C).

I've recently read this article by Purdue University, that states heat treating flour at home may not be a 100% risk-free process. I feel it's safe for me. Please make your own decisions and do what's best for you. The ice cream will still be nice and cinnamon-flavored if you skip the dough chunks.

How to Heat Treat Flour

Spread the flour on a microwave-safe plate or bowl. It's a good idea to add a bit extra as some flour tends to stick to the plate.

Microwave the flour in increments of 30 seconds, stirring in between. Use a thermometer to make sure the flour reaches a temperature of 165°F (74°C). This takes about 60-90 seconds for this recipe.

How to make the dough chunks

Cream the butter and sugar together. I do this with a spatula. You could use a mixer if you wanted to.

Add the salt, vanilla, and cream to the butter and sugar and mix it well with a spatula (or mixer). I used a cinnamon-flavored coffee creamer made by Starbucks.

Sift the flour in and mix together well. You're looking for a thick dough, just like cookie dough but softer than playdough. You may need to add more flour (heat-treated) or cream depending on the moisture level in your flour.

You'll only need half of this dough recipe but I found it difficult to make in smaller quantities. It's hard to get temperature checks on small amounts of flour. You can try it if you want or just save the cookie dough for another use, like snacking. Snacking is fun.

How to make the ice cream base

Whip the heavy cream to stiff peaks. You can do this with a stand mixer, a whisk, or an electric mixer. I use my trusty 3 in 1 blender/mixer with the whip attachment.

Once the cream is whipped, carefully fold in the sweetened condensed milk. You don't want to knock out all the air that you just whipped into the cream so go slowly and use a gentle hand. This works best with a spatula.

How to freeze no-churn ice cream

I like to use a bread loaf pan for my homemade ice cream. It freezes nice and quickly and fits the whole recipe. If you use a taller container, more like an ice cream pail, it'll take longer to freeze. You can also use a shallow food storage container with a lid.

To assemble the ice cream, bring the cookie dough out of the fridge or freezer. It will have thickened up a bit. This makes it easy to pinch little dough bits off of it. I do this all at once - using half of the recipe and pinching off dough bits to drop into the ice cream.

Remember you only need half of the dough recipe. Save the rest for snacking - add in mini chocolate chips and roll small amounts into cookie dough truffles.

So now you'll have the cinnamon-flavored ice cream, a base ice cream, and the cookie dough bits. You'll layer these into the bread loaf pan.

Repeat this for the rest of the ingredients. Be gentle swirling the second and third layers, only sticking the skewer in about an inch so that you don't disturb the layers underneath.

Once you've got everything in the pan, cover the ice cream with plastic wrap, pressing the wrap to the surface. This helps prevent ice from forming on top of the ice cream. If ice does form, just carefully remove it before serving.

To make the ice cream easier to scoop when serving, let it sit on the counter for 10-15 minutes.

✔ This recipe is vegetarian.

Feel free to omit the dough if you just want a cinnamon swirl ice cream.

For this recipe, I use my 3 in1 blender/whisk with the whip attachment for whipping the cream. I use a bread loaf pan to freeze the ice cream. You'll need a spatula for mixing, and an ice cream scoop helps when serving the ice cream. You'll also need a cooking thermometer for heat-treating the flour. I'll link all of these tools for you to check out.

Store this ice cream tightly covered in the freezer. It should stay good for a few months, but you'll probably eat it before then.

EXPERT TIP: Let the ice cream sit on the counter for 10-15 minutes before serving to make it easier to scoop. 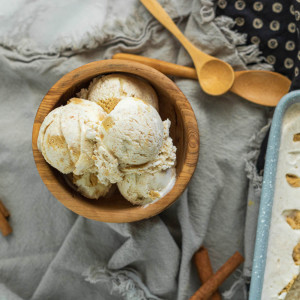 For the dough bits

For the ice cream

Storage - Keeps in the freezer for a few months. Keep in an air-tight container.

Read our full Nutrition Disclaimer.
Keyword no churn ice cream
Have you tried a recipe? Tag @pipercooksblog or tag #pipercooksblog!

Disclosure: This post may contain affiliate links, meaning I get a commission if you decide to purchase through my link, at no extra cost to you.

What does no-churn ice cream mean?

No-churn ice cream recipes do not need an ice cream maker to make the ice cream. The ice cream base is made with whipped cream and sweetened condensed milk instead of an egg-based custard.

Save this image to your Ice Cream board on Pinterest.